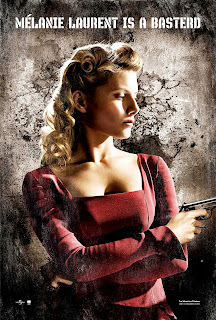 Quentin Tarantino’s Inglorious Basterds is a tour de force in its own way.


Like his other works Pulp Fiction this movie has a strong narrative and is performance driven, which is seen from the very beginning.

Though the story is based on fiction, the backdrop is taken from the time of Nazi Occupied France during 1941.
We are presented with two distinctive stories running in parallel. A girl with a fake identity seeking to avenge her family’s murder by Nazi; the other one emphasis on a group of American Jew soldiers led by perky Lt. Aldo Raine called as the “Basterds” for creating havoc within the German Army stationed in France, by brutally killing them and leaving behind their smudge of terror.

As usual Tarantino has achieved to render the violence on screen but restraining from calling this movie too gory. The style is unique and of course praiseworthy. The cast is well chosen, though we have lots of characters to deal with, the one which will linger in the viewers’ mind will be Colonel Hans Landa brilliantly enacted by Christoph Waltz.
We also have Brad Pitt as Lt. Aldo Raine; it would have been pleasant if his screen timing was little bit more, not to forget Mélanie Laurent, whose beauty was equally balanced by her shining act.

After seeing Downfall or Der Untergang I could not imagine anyone could play the role of Hitler other than Bruno Ganz. If you have not seen that movie you need to see to understand my implication, if you have seen then you probably know what I mean. I think this is the only reason why I would downslide the rating to some extent.

This movie is presented in chapters and is well tuned with background score. I think the originality was also achieved for keeping the language not restricted to English but also keeping German, French & Italian giving us a real feel of European atmosphere. Cinematography has also had been one of its strong points which surly will lure the eyes of the Academy Awards Committee. Note this is not a typical World War movie where it’s more action driven; here the drama element also takes a major role.

Overall if you like Tarantino’s movies, then there is a great chance that you may adore this flick.