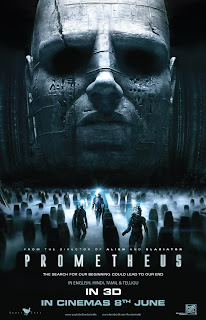 Finally after three decades Ridley Scott revives the Alien franchise. Prometheus can be considered as a direct prequel to Alien which even today stands out as an epic Science Fiction Horror cult noir.

Plot : Year 2089, two archeologists Elizabeth & Charlie during their routine survey stumble on certain star map paintings which happens to be the work of some ancient society. However after finding similar paintings of different unconnected civilizations they construe them to be an invitation from mankind’s creator whom they referred to as Engineers.  Their quest for the mysterious creators gets answered when aged Peter, CEO of Weyland Corporation invests trillions for the construction of scientific vessel Prometheus which would embark on a journey to a distant moon named LV-223 believed to be the home world of the Engineers. Elizabeth & Charlie fills up the rank of other handful scientists & geologist handpicked for the expedition. Just like the old series here too we come across an android named David who apart from keeping an eye on the exploration seems to have his own hidden agenda. On reaching the destination the explorers would soon find out that their pursuit for the origin of humanity is going to be jeopardized by an impending threat which could cause the extinction of human race.

Just like the predecessors, Prometheus too has female as the lead protagonist. Noomi Rapace as Elizabeth Shaw offered a credible role yet we cannot expect another Ellen Ripley. Sigourney Weaver was born to play the role of Ripley which eventually brought her to limelight. However Michael Fassbender as android David is the one to get noted for his fantastic performance & I liked him even more than Alien’s android Ash by Ian Holm. Presence of other heavy weight actors like Guy Pierce & Charlize Theron did not add much to the plot as their role was quite limited. Quite a few questions have been kept unanswered; whether it’s a deliberate attempt for building up a possible sequel, I will not be able tell for sure. Prometheus however works pretty well as a stand alone movie but gives due credit to her forerunners without overdoing.