Finally got the opportunity to put my hands on the latest title from EA; Medal of Honor Tier 1.
Those who are keeping update on the news might know that lots of controversy had been surrounding this game even before it got released.
One of the debates had been related to the Multi-player feature where a person can even play as the member of the Taliban faction. Most criticism came from UK Defense Secretary Dr. Liam Fox & Canadian Defense Minister Peter Mackay, who accused EA for trying to recreate the acts of the Taliban against the coalition forces in online gaming as rather offensive even though its only a game. After reading various articles I was really interested to see what exactly had been incorporated into the game and whether it was really that bad in nature or rather justifiable.

After finishing the game I can frankly say that it was really not necessary to make such a commotion on so petite issue. Electronic Arts have always been supportive for its homeland forces & they have maintained to do so here in their latest MOH title. So there is nothing in reality which should hurt the sentiments of the soldiers currently fighting in Afghanistan. One of the spokesman from EA has earlier aptly suggested that in online gaming some one has to take up the role of the bad person other wise against whom will the gamers play in the death match & other multi-player features, period. 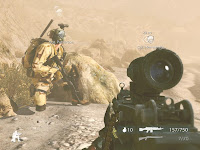 Let's now move on to the game itself. Being a hardcore fan of FPS (First Person Shooters) genre, I had been keen to get hold of this title. I guess this is the first game on the ongoing Afghanistan conflict. Once into the single player campaign, player will be thrust into variety of missions consisting of covert operations as well as full frontal assault. Both day & night missions are available, though the day ones are much detailed. You will be provided array of tasks like infiltration of Taliban controlled town Gardez to locate & extract a significant local leader for valuable enemy Intel to fighting your way through Shahikot Valley towards high ground for eliminating heavily defended enemy firing positions. 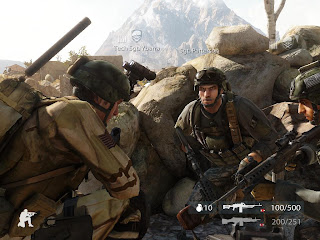 Just like Avtivision's Modern Warfare 2, Tier 1 campaign is very short. I was able to finish in hard mode in less than five hours. So this part is rather disappointing as MOH series have always provided extensive maps. This is definitely the shortfall of the game. Unlike Call of Duty franchise, the characters are not fully exploited, remember "Captain Price, Soap MacTavish" from MW Series. Here you get the chance to be in the shoes of the elite group The United States Naval Special Warfare Development Group (NSWDG) widely known as DEVGRU (ST6) as operator codenamed "Rabbit" & switch roles from time to time as Delta Force Sniper operator "Deuce" or as Army Ranger Specialist Adams, it is still hard to establish a connection with each of these characters. A little more on the story could have helped in some way. You will even get one chance to operate as AH-64D Apache Gunner for hunting down mortar teams & Al Qaeda RPG units.

The soundtrack is impressive; you can take a look at EA Trax Game Music

The graphics is good; especially the day missions are very detailed as we have earlier seen in EA's earlier title Battlefield Bad Company 2. The sound effect of the gun firing is the best feature in this game and it's where it surpasses the Modern Warfare Series. I have not used the Anti-aliasing feature as it would have affected my system performance, anyway you can easily make out from the screen shots I have uploaded from my gaming rig.

Overall this is an enjoyable title with some adrenaline pumped missions, still I would have preferred a little more involving story. If you have never played FPS games or like to experience how it really feels to be at war, this is the closest where you can ever get. This is where EA achieves to uphold the sacrifices made by the men & women in uniform.