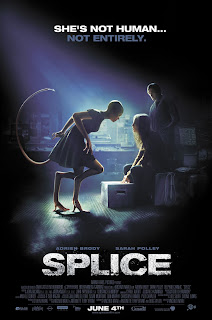 ‘Splice’ can be illustrated as an ideal science fiction thriller.

For those who are wondering the meaning of ‘Splice’, it refers to the scientific process where fragments of DNA (Deoxyribonucleic Acid) from different organisms are combined to form a recombinant DNA.

The story centers on a scientist couple Clive & Elsa, who have pulled off some amount of eminence for effectively splicing DNA, which helped them to create new species. In order to push further the scientific limits they urge with the pharmaceutical company who funds their research N.E.R.D (Nucleic Exchange Research & Development) to let them do splicing of the human DNA but their request is put down, instead the company insists them to extract some protein from the already created species so that they can create some medicine which might help for the company’s financial stock. 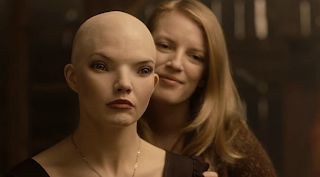 As you might have already presumed, they naturally go ahead with the splicing and create a new type of hybrid which is half human and half animal; Elsa lovingly names it as ‘DREN’, nerd spelled backwards. From here onwards the story swiftly shifts & shows what risks they start to face which brings into question the scientific morality, ultimately their love for crossing the boundaries brings colossal horror from which they have no escape. I would prefer not to reveal anything more on the plot.

Adrien Brody & Sarah Polly are just great as the genetic engineers but the real show-stopper is Delphine Chaneac, who brings intensity to the character of ‘Dren’.

The best part of this movie is some erratic moments which in these days’ movies fail to deliver typically in case of horror genre. Overall this has a great narrative powered by impressive acting which will certainly keep you at the edge of your seat.