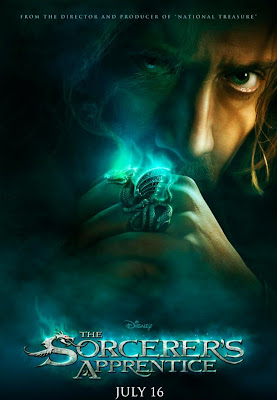 So far couple of movies have been made on sorcery, Harry Potter Series & Stardust remains to be most privileged among the movie aficionados.

The plot remains simple with a story blend in two time frames. It begins with the year 740 A.D. when one of the apprentice Maxim Horvath, betrays his master Merlin & joins an evil sorceress Morgana for world dominance. The duel ends with mortally wounding Merlin & imprisonment of Morgana in a nested doll by Balthazar; one of Merlin’s loyal apprentices. Before dying Merlin gives Balthazar a metal dragon instructing that it would lead him to his true successor, who will be competent in finishing Morgana once and for all. Searching for centuries to meet the true heir brings Balthazar to the present day . Finally the journey completes on finding the chosen one and his ultimate training from Balthazar to master the skills in sorcery before facing Morgana.

Though the movie conveys the story in a clear-cut way, at times it did look very predictable. A little bit complexity could have been used to raise the interest. The visual effects were impressive but a quick bland climax was not passable to carter this as the best movie yet. Nicholas Cage as Balthazar had been imposing but it lacked the strength he successfully delivered in Kick-Ass. Jay Baruchel as Dave was supposed to be the savior in this movie but I guess the overall weak pinnacle added as the final blow. The overdo of simplistic narrative marred the other characters to shine, like Alfred Molina’s Maxim Horvath & that of Monica Bellucci whose limited screen presence had nothing much to offer.

This is a plain fantasy movie which is relatively less engaging. Ideal for any one who likes simple plot glittered with tons of visual effects.