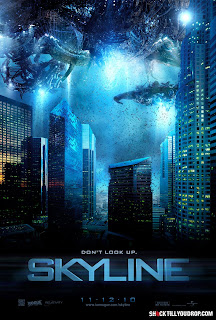 By this time I think most of you have came across the news allied to the upcoming movie Skyline.

From the trailer it’s clear that we are going to get another movie based on alien invasion. Once again it seems that this genre is getting rejuvenated.

Next year we are going to see two movies based on related premise; I Am Number Four & the prequel of The Thing.

Not much is known about this movie; whatever nits & bits are scattered around in the internet stands as; after a late night party, a group of friends are awakened by a strange light beam coming from the sky. Drawn by its bizarre brightness they soon discover some thing very disturbing. Some strange spaceships are found to be hovering in the sky and swallowing the entire population by luring them to the open with its unusual light. So the story centers on this group of friends who tries to save themselves from this new terror.

This movie is directed by Strause brothers (Colin & Greg); those who don’t know about them, they are the ones who have directed the failed sequel Aliens Vs Predator: Requiem a.k.a AVPR. 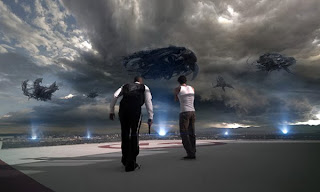 The good news is, they were also the same people who have been behind the visual effects for some of the acclaimed blockbusters namely Iron Man 2, Avatar, 300, The Incredible Hulk, Shooter, Babel & many more. So that’s quite impressive.

In a way if the movie fails commercially, I think visually this movie will be spectacular. The teaser trailer is very promising and I wish that it lives up to the hype, which is going on in an aggressive mode.