The Next Villain In Batman 3 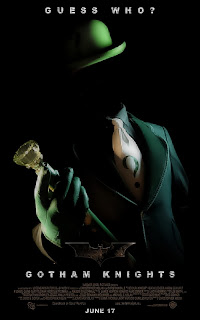 So, who can be the next villain in Nolan’s Batman 3?

There is a lot of buzz going around that it might be Edward Nigma a.k.a 'The Riddler'.

Couple of days back in IMDB it was listed that Leonardo DiCaprio was speculated as the next villain 'The Riddler'.

Inception brings us couple of new faces, Leonardo DiCaprio, Joseph Gordon Levitt & Tom Hardy. There is a possibility that we might soon see any one of them in the forthcoming Batman movie.

Since Nolan has already started to think about bringing the final installment of the Batman series, I guess there is a lot of anxiety for the entire team. If they are to outdo The Dark Knight they need to bring a character which can be at par with late Heath Ledger’s immortalized character, 'The Joker'.

Nolan has created a very rational batman world so prospect of bringing 'The Penguin' or even 'Killer Croc' is quite frail. I don’t know whether there will be a 'Catwoman' or not as it’s very premature for an early assumption.

If by any chance we do have 'The Riddler' as the main adversary, I have thought about couple of names who seems to be competent enough to portray the character to its fullest extent.

Edward Norton or Guy Pearce looks to be the best choice. Both the batman movies have presented multiple villains so another character which can be brought into the installment can be 'Deadshot' which can be taken up by Joseph Levitt.

Fans are asking for Johnny Depp, honestly I don’t think our 'Jack Sparrow' will be able to put up the riddler character very well, the alternate best choice will be Leonardo as this will be a kind of different challenge for him; at the same time a negative role for a change.

Who ever comes as the next villain needs to work very hard to make this final part unforgettable. We have never been let down by Nolan, so I am sure whatever he and his team are up to will definitely give us the memorable moment for 2012.

Till then let’s keep our hands folded.